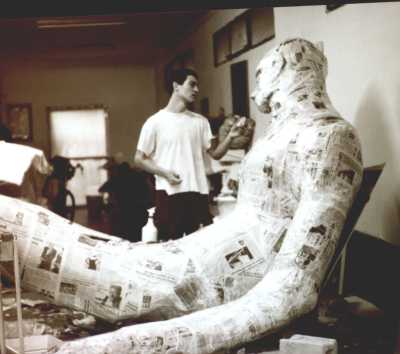 Giacomo’s work over the past 20 years has been largely autobiographical, working through the process of self-exploration, depicting his life’s journey thus far.

Recently, having settled in South Africa once again, his interest shifted to portraying society’s message and his response to that message in terms of political, socio-economical, racial and environmental subject matter.

Being European born and spending the first 6 impressionable years of his childhood in apartheid South Africa, Giacomo was deeply affected by the beauty, open spaces and people of Africa but at the same time experienced a lack of stability within his family life as well as the political situation of the country at that time.
This instability and being torn between Italy and South Africa has shaped Giacomo’s life as well as his art work.

Having an European mind but an African heart has strongly influenced his most recent work.

The use of Gold leaf comes from spending his adolescence in the Florentine art world, while attending the National Institute of Art.
Giacomo was strongly affiliated to the experience of sculpture through the work and career of his father. This experience enhanced Giacomo’s fascination with textured surfaces and the exploration thereof.

Giacomo’s art work reflects the contradictory experiences within Africa and society at large; a human experience and expression thereof.